Room with a view … Business Observer

Room with a view … Business Observer

In just a few years, Thomas Cremona has managed to make his fledgling company, Casa Rooms, into the third largest property management company for Valletta in terms of portfolio, and he is crossing his fingers that by the year end he will be the top one. 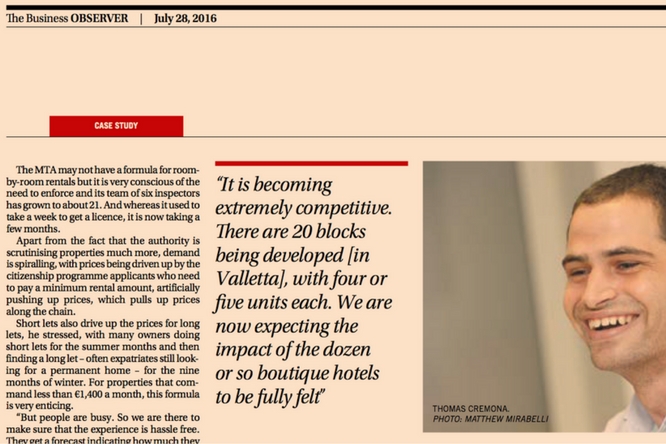 Don’t scoff. This is a man known for his determination, a trait which made him the first Maltese to row across the Atlantic five years ago, a gruelling 34-day trip made even harder by the fact that he was seasick almost the whole time.

The trick, he confided, is very simple: preparation, 18 months of it in the case of the rowing challenge, for both sponsorship and fundraising, for media awareness and for the physical and psychological readiness. Indeed it is this approach which has put his company on the map in such a relatively small time.

“The problem was getting someone to believe in me. When I started the project I was only 21,” he said, breaking into a smile. “You have to be persistent – a pest! – and slowly things start to work out. I learned a lot about the drive to have a dream and to take the risk. You can do something if you put your mind to it.”

An accountant by profession who over- came leukaemia at the tender age of four, he was working with KPMG but the entrepreneurial urge was already itching.

He was intrigued by the property market but realised that owners were afraid of not getting paid. He decided that solving this problem – through a property management company – would actually be quite interest- ing, and Casa Rooms was born.

The economies of scale are against you when you set out in this field. Clients need 24/7 care and he admitted, with another chuckle, that he has not had a Sunday off for over a year.

“One of the clients managed to lock him- self out on the balcony in the middle of the night but as the key was in the door, we could not open up from outside. In the end, we had to find a locksmith in the early hours of the morning!”

“Another time I had to wash all the dishes after a short let as the turnaround was too tight for the cleaners to cope with it all!”

The Maltese market is very interesting for owners as legislation does not limit the amount of time that you can offer lucrative short lets, as happens in other countries. And for host families, the Malta Tourism Authority actually has a scheme of fiscal incentives. Mr Cremona said that the legislation here is actually one of the strongest ones, when it comes to owner protection.

However, there is a gap in the market that concerns him: the sector has scope to grow but is being hampered by the lack of clarity with regards to room-by-room accommodation, something that is widely done for English language students.

“The British have a system and you can pay an extra fee to rent to unconnected people. Here there is a licence for host families and for holiday furnished premises. But there is no licence for room-by-room where the host does not live on site. The Malta Tourism Authority is not very happy about it – but obviously the price you get from renting room by room is much more than for the property as a whole.

“This is getting more important as the price of rentals has gone up and people can no longer afford to rent a flat on their own any more. A landlord can rent it out to one person who then rents out to his friends – so the land- lord ends up renting to all sorts of people he has no control over. Each tenant should have the same rights,” he pointed out.

“You have to be persistent – a pest!… I learned a lot about the drive to have a dream and to take the risk. You can do something if you put your mind to it”

The MTA may not have a formula for room- by-room rentals but it is very conscious of the need to enforce and its team of six inspectors has grown to about 21. And whereas it used to take a week to get a licence, it is now taking a few months.

Apart from the fact that the authority is scrutinising properties much more, demand is spiralling, with prices being driven up by the citizenship programme applicants who need to pay a minimum rental amount, artificially pushing up prices, which pulls up prices along the chain.

Short lets also drive up the prices for long lets, he stressed, with many owners doing short lets for the summer months and then finding a long let – often expatriates still look- ing for a permanent home – for the nine months of winter. For properties that command less than €1,400 a month, this formula is very enticing.

“But people are busy. So we are there to make sure that the experience is hassle free. They get a forecast indicating how much they should make over a year and they also get a monthly report, with their cheque. They give us the key and then it is up to us, which is very important as most of our clients tend to be people who live outside Malta or who are very busy,” he said.

Casa Rooms already has some 40 proper- ties on its books, so the economies of scale have really started to kick in. It now has two people in the office and outsources around six cleaners, a handyman, plumber and electrician. The company looks after arrivals and departures – around 100 taxi trips a month – the cleaning, linen, etc.

“It is becoming extremely competitive. There are 20 blocks being developed [in Valletta], with four or five units each. We are now expecting the impact of the dozen or so boutique hotels to be fully felt”

Since many of the short let clients find properties through AirBnB and Booking.com, good reviews are critical.

“They are better than anything that the Malta Tourism Authority can impose as they make or break you.

“We once took over a property which had terrible reviews and although tenants were willing to give us a chance as we had only just taken over, there were many times I wondered whether it would have been better to drop the profile and start again! On the other hand, you can have an average property but if you get five-star reviews throughout. you can push up the price.

“Reviews tend to pick on cleanliness. They are usually quite well prepared with regards to the furnishings as there are pictures on the site. We get a lot of comments on water pressure and they are sometimes overwhelmed when the experience is a bit too Maltese as our buildings tend to be very humid, and hot in summer and cold in winter!

“It is also about matching expectations as some want a concierge service. When they call asking for all sorts of things, it is up to us how we handle it. We do our best,” he said.

Mr Cremona has been able to add a unique selling point for owners through his market analysis, which is so detailed that it has enabled him to pick up very small shifts of up to a euro per person per night in Valletta, his biggest market.

“It is becoming extremely competitive. There are 20 blocks being developed, with four or five units each. We are now expecting the impact of the dozen or so boutique hotels to be fully felt,” he warned.